Veterinary ophthalmology is the study and treatment of disorders of the eye of different animals. Our medical team can treat a variety of both genetic and environmental caused eye issues. Here are a few examples of common ophthalmology conditions and procedures:
Book An Appointment 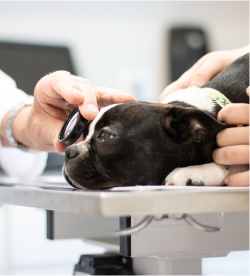 Cataracts: Similar to human cataracts, veterinary cataracts become more common and prevalent with age. They often have a cloudy or milky appearance on the lens of the eye. If severe, they can greatly affect the vision of the pet, and cataract surgery can help reverse some of the damage.

Glaucoma: This ailment is caused by increased pressure inside the eye which can eventually lead to damage of the optic nerve and retina. 40% of dogs affected by glaucoma will become blind in the affected eye with the first year. Certain dog breeds are predisposed to glaucoma, including samoyeds, cocker spaniels, poodles, and chow chows. The goal of glaucoma treatment is to stop the further spread of the disease, because the damage caused by glaucoma is irreversible.

Prolapsed gland of the third eyelid (or cherry eye): This condition is common in certain dog breeds, such as the hound group, and commonly referred to as cherry eye. It can put the surface of the eye in danger, and surgical replacement of the gland is suggested for long-term health and safety.

Conjunctivitis: This disease is an inflammation of the eye affecting the lids and outer lens. In cats, infectious causes of conjunctivitis are common, in fact, conjunctivitis is the most common feline eye disorder. In dogs, it might be caused by an allergy or a disorder of the tear film. Sometimes, conjunctivitis will clear up on its own, but it is important to bring any pet with symptoms in for a check-up to rule out a more serious eye disorder. Medicated eye drops can also be prescribed for a faster recovery.

Located off of Oklahoma 3W on the corner of N Kickapoo St and W Independence St.

Send Us A Message!

Shawnee Animal Hospital is available for emergency services 24 hours a day, 7 days a week, for both small and large animals.